May 11, 2018
I’m not a scholarly man and I have no vision to come up with any new theories, what I hope is to get a glimpse of the understanding of the world held by many greater thinkers. But why is it so important for me to get this understanding when I’m just a simple man? It started a few years ago when I wanted to build a nest for myself and my beloved wife. Unfortunately, what should have become an expression of our lives and our unification with the universe, became like being sucked into a black hole, losing all energy and trust in society.


The developer would of course say that it was something wrong with me; as would the people of the bureaucracy. But could it be a problem somewhere else? Could it be that what happened with me was a healthy reaction against sick structures in society? After I came to know Christopher Alexander I see this as a possibility:

The mechanistic idea of order can be traced to Descartes, around 1640. His idea was: if you want to know how something works, you can find it out by pretending that it is a machine. You completely isolate the thing you are interested in – the rolling of a ball, the falling of an apple, the flowing of the blood in the human body – from everything else, and you invent a mechanical model, a mental toy, which obeys certain rules, and which will then replicate the behavior of the thing. It was because of this kind of Cartesian thought that one was able to find out how things work in a modern sense.

However, the crucial thing which Descartes understood very well, but which we most often forget, is that this process is only a method. This business of isolating things, breaking them into fragments, and of making machinelike pictures (or models) of how things work, is not how reality actually is. It is a convenient mental exercise, something we do to reality, in order to understand it.


Descartes himself clearly understood his procedure as a mental trick. He was a religious person who would have been terrified to find out that people in the 20th century began to think that reality itself is actually like this. But in the years since Descartes lived, as his idea gathered momentum, and people found out that you really could find out how the bloodstream works, or how the stars are born, by seeing them as machines – and after people had used the idea to find out almost everything mechanical about the world from the 17th century to the 20th century, people shifted into a new mental state that began treating reality as if this mechanical picture really were the nature of things, as if everything really were a machine.


For the purpose of discussion, in what follows, I shall refer to this as the 20th century mechanistic viewpoint. The appearance of this 20th century mechanistic view had tremendous consequences, both devastating for artists. The first was that the “I” went out of world picture. The picture of the world as a machine doesn’t have an “I” in it. The “I”, what it means to be a person, the inner experience of being a person, just isn’t part of this picture. Of course it is still there in our experience. But it isn’t part of the picture we have of how things are. So what happens? How can you make something which have no “I” in it, when the whole process of making anything comes from the “I”? The process of trying to be an artist in a world which has no sensible notion of “I” and no natural way that the personal inner life can be part of the picture of things – leaves the art of building as a vacuum. You just cannot make sense of it.


The second devastating thing that happened with the onset of the 20th century mechanistic world-picture was that clear understanding of value went out of the world. The picture of the world we have from physics, because it is built only out of mental machines, no longer has any definite feeling of value in it: value has become sidelined as a matter of opinion, not intrinsic to the nature of the world at all.


And with these two developments, the idea of order fell apart. The mechanistic idea tells us very little about the deep order we feel intuitively to be in the world. Yet it is this deep order which is our main concern. – The Phenomenon of Life, by Christopher Alexander, page 16.

I should like to say; the whole goal is to make the world whole. The ancient Greek word hamartia is rooted in the notion of missing the mark, and is in our culture better known as the word ’sin’. The whole goal with our existence, our time on the Earth, is to make the world whole, a living whole. I cannot imagine a greater sin than not making the world whole, because not doing so we completely miss the mark, the goal, and doing this we lose ourselves as well. To see the world as fragmented, as parts – machinelike, according to the mechanistic idea of order – we are creating the framework for the biggest sin ever committed by mankind. This is why we should now enter the post-Cartesian era!


The huge difficulties in architecture were reflected in the ugliness and soul-destroying chaos of the cities and environments we were building during the 20th century – and in the mixed feelings of dismay caused by these developments at one time or another in nearly every thinking person, indeed – I would guess – in a very large fraction of all people on Earth . - New Concepts in Complexity Theory (PDF), Christopher Alexander

But how is it possible to make something whole? Isn’t such a big task better left to God? No, this could not be more wrong! It is our mechanistic idea of order that robs us from what is natural for us to do. And worst of all, this false idea of order has now become so massively pervasive and organised in our society that even if you want to and know how to make something whole, you will be opposed and oppressed by the system. The system doesn’t allow you to become whole, by making your world whole. Our current systems are not whole, not at all.


What is then needed to make something whole? According to my still very small and limited understanding of Alexander’s work I see four key points:
To be honest, the entrepreneurs that built my house were doing the opposite of all this in every way. The only interests they had were, in the following priority: to make money (use the simplest materials implemented in the simplest way), to follow the drawings (a drawing or design made a long time ago by a person far away, used a hundred times at very different places) and to follow the laws (doing the minimum that the building laws require). I cannot see that this entrepreneur, a huge entrepreneur, had any interests for the whole at all.


And this way there could not be any “I” in what they were making for me and my wife, because they didn’t give a damn about me or my wife. A thing, a house, a place, can only be whole if there is an “I” in it, if you feel to be one with the world and the universe when you see it, or live in it.


Another devastating introduction in the early phases of industrial society was “the invisible hand”, by Adam Smith.

But, by contrast, in the early phases of industrial society which we have experienced recently, the pattern languages die. Instead of being widely shared, the pattern languages which determine how a town gets made become specialized and private. Roads are built by highway engineers; buildings by architects; parks by planners; hospitals by hospital consultants; schools by educational specialists; gardens by gardeners; tract housing by developers.


The people of the town themselves know hardly any of the languages which these specialists use. And if they want to find out what these languages contain, they can’t, because it is considered professional expertise. The professionals guard their language jealously to make themselves indispensable.


Even within any profession, professional jealousy keeps people from sharing their pattern languages. Architects, like chefs, jealously guard their recipes, so that they can maintain a unique style to sell.


The languages start out being specialized and hidden from the people; and then within the specialties, the languages become more private still, and hidden from another, and fragmented. – The Timeless Way of Building, by Christopher Alexander, page 231 – 232.

This is the work of “the invisible hand”; this is what happens
when cooperation is replaced with competition, the beautiful pattern languages of our communities die. 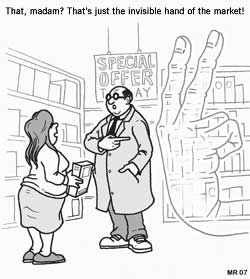 To believe in “the invisible hand” is like believing in the emperor’snew clothes; it makes no sense. What we should do is dress up with real clothes decorated with beautiful patterns of eternal truth.


What we need now is to replace “the invisible hand” with “the visible hand”. But where is this visible hand? Actually, it could be your hand, because a true pattern language is generated by the actions made by the hands of millions.


Still, the most visible hand I see in the world today carries the name permaculture, and this hand holds a big pencil, a pencil which creates the most beautiful patterns upon the surface of our Earth – a beautiful pattern language.


How can we know that something is whole? What would it feel like if our world were whole? In a timeless world, with a timeless way of living!

When we are as ordinary as that, with nothing left in any of our actions, except what is required – then we can make towns and buildings which are as infinitely various, and peaceful, and as wild and living, as the fields of windblown grass.

Almost everybody feels at peace with nature: listening to the ocean waves against the shore, by a still lake, in a field of grass, on a windblown heath. One day, when we have learned the timeless way again, we shall feel the same about our towns, and we shall feel as much at peace in them, as we do today walking by the ocean, or stretched out in the long grass of a meadow. – The Timeless Way of Building, by Christopher Alexander, page 549.

This article is published at The Permaculture Research Institute of Australia on September 15, 2010. At P2P-Foundation on March 12, 2017.