What's the Secret of Making a Happy City?


"We might start by using potted plants, benches, and picnic tables to block cars from entering the streets at the heart of our cities.  We can then convert the space cars once dominated to make room for pedestrians and bicyclists, for people to gather, and for community to grow.  We can welcome the idea that we have a common duty to participate in civic life and, in that participation, discover what true happiness is all about."

“What are cities for?” and “Who owns them?” These are two of the questions addressed by award-winning journalist Charles Montgomery in his book, Happy City.  As the title of his book suggests, Montgomery ties these two questions to the issue of happiness.  If the pursuit of happiness is something important to us, he says, the way we build and live in our cities should reflect our idea of what happiness is. 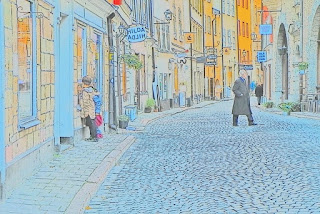 Montgomery tells the story of two ancient cities – Athens and Rome -- to illustrate differing views of happiness as expressed in the design of each city.  Athens in ancient Greece was designed around the idea of “eudaimonia” – a term introduced by Socrates to mean a state of human flourishing or the state of having a good in-dwelling spirit.  For the people of Athens, the city was more than a place to live and work.  It was also a concept about how to live.

The people of Athens loved the city for the way it supported a rich cultural and civic life.  For them, happiness meant so much more than good fortune and material wealth.  It embodied both thinking and acting, and necessarily included active civic engagement.  In their way of thinking, active participation in public life made an individual become whole.

The ancient city of Athens was designed to accommodate and encourage active participation.  The agora – or large plaza – was the heart of the city.  Here, people could stroll, shop, and gather for public discourse.  It was in the agora where democracy and civic engagement flourished.  It was also in the agora that Socrates and other orators of the time held discussions on such philosophical issues as the meaning of happiness.

Ancient, Rome, on the other hand, reflected different ideas about the meaning of happiness.  While initially designed to reflect more spiritual values, Rome shifted over time to focus more on power and individual glory than on the common good.  Huge monuments were constructed in honor of the Roman elite.  Public space and the well-being of the majority of the people suffered gross neglect.  The city became an unpleasant place to be; and many, who could afford it, retreated to the countryside.  City life had become too disgusting.

So what can we learn from this tale of two ancient cities in relation to the pursuit of happiness?  We can start by defining what we mean by happiness.  Do we think happiness is all about individual success and well-being or do we see individual happiness as being tied to the well-being of a larger society?  In other words, can we be happy in a miserable society?  Can we be happy if we aren’t involved in shaping the well-being of society?  It’s only when we’re clear about what happiness means to us will we be able to design our cities in a way that reflects and supports our idea of happiness.

More than half of the human population now lives in urban areas.  It’s incumbent upon us to ask, “Are these happy places?  Do our cities support our individual and collective well-being?  If not, how can we make them so?”  That’s where Montgomery’s questions come in to play: “What are cities for?” and “Who owns them?”  A close look at many cities suggests that their purpose is to house people, serve commerce, and move people and goods from one place to another.  Some cities also erect monuments to the glory of historical people and events.

The second question is about who owns the city.  Who owns the streets, the sidewalks, and the monuments?  Who gets to decide how cities will be used, what activities will take place in the city square, and where cars may and may not go?

The people of ancient Athens had no trouble answering these two questions.  They knew they owned the city and they went about making the city a place where happiness could flourish.  We, on the other hand, seem to be lost in a state of confusion.  We claim a right to the pursuit of happiness, but then allow our cities to become entities inconsistent with what we think we’re pursuing.

Look at a map or an aerial view of almost any city.  Is there any doubt that cars have taken over ownership of our cities?  Does this reflect our idea of happiness?   Most of us love our cars and the convenience they provide in getting us almost anywhere we might want to go.  Yet we see that city life built around the use of cars has actually diminished our enjoyment of the city.  We get stuck in traffic jams, use valuable city space to construct parking lots and parking garages, make walking and biking dangerous and unpleasant, and become increasingly isolated from the world of nature and from other people in our community.  Montgomery studied cities around the world and came to the conclusion that cities – especially the streets of cities – can be friendly to people or friendly to cars, but not to both.

So what are we to do?  Our cities are already built, the streets laid out in concrete.  But that doesn’t mean we’re stuck.  We might look to another tale of two cities for inspiration – this one, the story by Charles Dickens.  Most of us are familiar with the opening lines:  “It was the best of times, it was the worst of times, it was the age of wisdom, it was the age of foolishness . . . .”   While Dickens’ novel is set in the 1700’s, these dramatic lines might be applied to conditions of today, as well.  Dicken’s story in A Tale of Two Cities is about duality and revolution, but it’s also about resurrection.

The idea of resurrection might help us redefine and redesign our cities to make them more consistent with our view of happiness.  We don’t have to accept cities for the way they are.  We can resurrect the idea of the city as a place that nurtures our wholeness and that brings us together.  We can take back ownership of our cities by becoming more involved in civic life, and we can insist that our cities serve as a means to a desired way of life, not just a backdrop to life.  We might start by using potted plants, benches, and picnic tables to block cars from entering the streets at the heart of our cities.  We can then convert the space cars once dominated to make room for pedestrians and bicyclists, for people to gather, and for community to grow.  We can welcome the idea that we have a common duty to participate in civic life and, in that participation, discover what true happiness is all about.